Managers Can Learn From NFL Draft: Why High Potentials “Fumble”

Why do so many high-profile, high potential candidates and employees “drop the ball” when it is their time to shine?  Hiring managers can learn a lot from the NFL.

Many managers find it a mystery why so many high potential candidates and employees fail. It shouldn’t be. 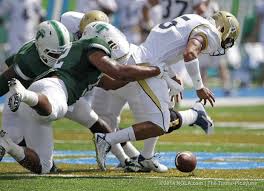 Multiple studies have shown that the road to identifying high potentials is full of many detours, potholes, and distractions.  The failure of many highly recruited executives, managers, and other professionals to succeed in their new role and/or new company is legendary.

To support the premise that the identification of high potentials is a process that needs a makeover and must rely on better data, look no further than the National Football League draft.

Billions of dollars are literally at stake based on the results of this selection of talent.  In addition to mega-salaries, revenues, reputation, and even the Super Bowl hinge on the success of this two to three day event. Months and months of preparation, analysis, interviews, personality tests, and “work samples,” not to mention the millions of dollars and thousands of man-hours, go into identifying players with the highest probability of becoming a pro football player. You would think that with all that is at stake, the NFL “employee selection” model for identifying high potentials and top performers would be worthy of duplication.

But you’d be wrong. The NFL draft is just another high profile case study of how traditional looks at future performance aren’t working.

Each year many of the top drafts (high potentials) fail while prospects drafted much later or left undrafted become Hall of Famers.

Peyton Manning for example is a number one draft who has met and even exceeded all expectations. Cam Newton seems to be living up to expectations, too.  Like Newton, high potentials Troy Smith, Eric Couch, and Andre Ware also won the Heisman trophy and were drafted very high. But unlike Newton, all of them were a bust in the NFL.  They are not alone.  The number of high-profile-top-draft choices who fail to live up to expectations and often are complete busts creates a very long list.

Scouts and coaches, like recruiters and managers, are so obsessed with looking at the obvious, they miss the diamonds in the rough.

Take Kurt Warner. Warner, who just this weekend was nominated for the Hall of Fame, went undrafted. Adam Vinateri, possibly the greatest kicker of all time and whose foot helped win two Super Bowls (and continues to perform well in clutch situations, was undrafted. Future Hall of Famers Wes Welker and Antonio Gates were also undrafted. Hall of Fame QB Warren Moon was not drafted. Even Tom Brady wasn’t picked up until the sixth round of the draft (#199).

Something is wrong, very wrong with how professional teams as well as companies identify high potential candidates and hire employees. Despite the volumes of documentation about how education and intelligence are near useless predictors of future performance, companies still rely on these criteria. Resumes are merely self-promotional marketing compositions, often more fiction than fact. The same goes for the interview where candidates often out-duel, out-smart, and out-perform their interviewers. Candidates are simply better prepared to respond to questions than hiring managers are skilled at asking questions, observing behavior, and listening to answers.

Even past experience has become a poor predictor with few roles and situations playing out exactly the same way as they did before.  It is not past experience that predicts future success but how the candidate applies what he learned from the experience, especially when the next situation presents new challenges.  And often time, the company culture, economic conditions, and even luck contributed to the individual’s success.  When external factors change, it’s not the experience that matters but what the candidate will do with it.

So what can companies learn from the hiring successes and failures in the NFL.