Perhaps poet and author Carl Sandburg said it best: “Money is power, freedom, a cushion, the root of all evil, the sum of blessings.” It might be fair to say that we are all motivated by money. After all, we need money to put food in our bellies, clothes on our bodies, and roofs over our head. Each of us may just value it differently for different reasons. 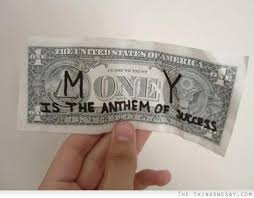 For some people money is a badge of honor, a metric of success, a status symbol. For others and likely the majority, money is just a means to an end. That end is determined by other personal values, five to be exact – Conceptual, Aesthetics, Social, Power & Authority, and Doctrine. (I go into greater details in other articles.)

You might say the Economics Value is a bit schizophrenic. It has many faces.

For the extravagant, braggadocios, and flamboyant “The Donald” aka Donald Trump, money is everything. He flaunts his money, his buildings, and his golf courses like a Super Bowl winner parades his ring. Money is his status, power, and success all rolled up in one enchilada.  Everything Donald Trump does is over the top so it’s no surprise then that even his Boeing 757 private jet is equipped with only the biggest and best:

The aircraft can hold up to 43 passengers and has a dining room, master bedroom and bathroom, guest bedroom, and VIP lounge, complete with Rolls Royce engines powering it all. If that wasn’t enough, Trump even decided to bring some gold accents on board including lining his master bedroom in gold silk, installing a 24-karat gold plated sink in his bathroom, and adding gold plated seatbelts to the cozy chairs. (Source: People Magazine)

Fortunately most people who share the Economics value are focused on more than spending on the big and bodacious. Some save it, invest it, and accumulate it. They are the millionaires who live next door. They might even be the billionaire next door. And who better to represent this Economics example than the legendary and enormously successful investor Warren Buffet.

In stark contrast to Trump, Buffet lives a lifestyle that hasn’t changed much since before he made his billions. Buffett, one of the richest men in the world, still lives in the same home he purchased for modest sum of $31,500 in 1958. He is well known for his simple tastes, including McDonald’s hamburgers and cherry Coke, and his disdain for technology, including computers and luxury cars. Buffett is legendarily frugal. As he puts it, “most toys are just a pain in the neck.” Some might even describe him as a cheapskate.

The schizophrenic nature of the Economic value shows up in other utilitarian ways too. The utilitarian may embrace time and resources as robustly as Trump and Buffett value the almighty dollar. Utilitarians value the economy of things. They seek usefulness and practicality. Whether it’s a dime invested, a minute spent doing something, a helping hand extended, or a task completed, it doesn’t matter to the person who sees the world through the Economic filter.  Money, time, resources and effort are all valuable capital that can be earned, invested, saved, or spent.

Surprisingly, not all people who value Economics are rich. Frugality is a good practice but sometimes people can go overboard and become blinded by obsession. Consider the penny-pinching, coupon-clipper who often leaps over dollar bills to pick up pennies. He might use more gas than he saves by driving miles out of his way to save a few cents on a gallon of gas.  It could also be:

It should come as little surprise that the Economics value has significant influence in business. For many roles and company cultures, the Economics is almost a required value for an employee to fit in. Unfortunately for managers who misuse values, the Economics value is not a competence indicator. It just reveals where a person will focus his or her attention when making decisions and choices. It gives no insight if he has the skill or ability. Consequently, not all people who value Economics make good bottom-line decisions.

Here’s the bottom line of the Economics value: if money or utility motivates you to earn, invest, save, or spend more, then Economics is likely one of your strongest values. In other words, if you see the world through an “is it worth it” prism, then Economics influences all your life choices and business pursuits, from jobs you seek to where you donate your money.

Do you recognize anyone who is motivated by economics? Perhaps you’re one of them. Must everything you permit to enter your life have a purpose? Do others consider you a wise investor, frugal utilitarian, or even a bit of cheapstake?